When you head to the doctor for an ailment, you might expect to get a sick note for a cold or the flu, but what about your mental health? As it turns out, sick notes for stress are not as uncommon as you might think, at least in the UK.

A fit note, as it’s called in the UK, can be issued by a general practitioner to inform an employer of whether an individual is “fit to work.” These notes are given to companies for sick pay purposes. They may state that an employer should alter hours, amend certain duties, or change the workplace in order to make it more suitable for an employee. 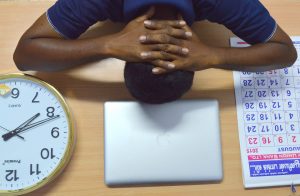 Recently, a group of researchers from the Royal College of Psychiatrists looked at more than 12 million fit notes issued over the course of two and a half years across England. About half of these notes had defined diagnoses for patients. Between 2015-16 and 2016-17, there was a 14 percent increase in fit notes related to anxiety and stress. In total, nearly one-third of them were issued for psychiatric problems.

“These figures explain why the NHS is now putting mental health front and center, in what was recently independently described as ‘the world’s most ambitious effort to treat depression, anxiety and other common mental illnesses,’’” Simon Stevens, chief executive of NHS England, told the BBC. (Silver, 2017)

Jed Boardman from the Royal College of Psychiatrists believes that employers are not doing enough to change the workplace and make it healthier for those suffering from mental health issues.

“GPs will write suggestions on the fit note, such as staggered work days or agreeing specific goals for the returning employer – both parties need to be more active in tailoring these suggestions to that person,” Boardman told the BBC.

In response to the researchers’ results, a spokesperson from the Department for Work and Pensions said that help is being given to those who look to return to work after an illness. But could these types of mental health issues be prevented altogether?

While there is no sure-fire way to prevent mental health problems from arising, there are signs that you may need to take a day off for the sake of your well-being. Fatigue, chest pain, headache, and muscle pain are some of the physical signs of extreme stress. (“How stress affects your body and behavior,” n.d.) Anxiety, restlessness, irritability and depression may also manifest as mood changes. In these instances, think of setting aside time for yourself to maintain your mental health.

Mental Health in the Workplace: Reducing the Stigma

How to Relieve Stress and Anxiety During the Holidays