When goldfish are swimming around in their bowl, have you ever stopped to think about what they may be producing through their gills? As it turns out, these otherwise common fish have an uncanny ability to create something humans never would’ve guessed: alcohol.

This is what one group of researchers recently determined in a study published in Nature. When it comes down to the nitty-gritty, goldfish have developed a new way to stay alive. (Fagernes et al., 2017)

“Without oxygen, most vertebrates die within minutes as they cannot meet cellular energy demands with anaerobic metabolism,” wrote the authors of the report. However, fish of the genus Carassius (crucian carp and goldfish) have evolved a specialized metabolic system that allows them to survive prolonged periods without oxygen by producing ethanol as their metabolic end-product.” 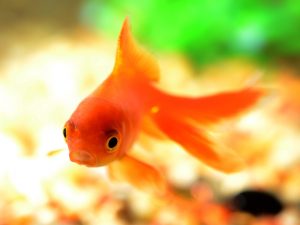 To make their determinations, the researchers collected goldfish of mixed sex in a small pond outside of Oslo, Norway. They were kept in 750-liter tanks and continuously supplied with dechlorinated, aerated Oslo tap water at the Department of Biosciences at the University of Oslo.

Over time, the fish were fed carp food each day, and they were exposed to 12 hours of daylight and 12 hours of darkness. The water temperature was consistently kept at 6 degrees Celsius. Then, the experimentation began.

Randomly selected goldfish were transferred to experimental tanks that had continuous flow-through water supply. Here, they were left to acclimate and fast for a minimum of 30 hours. These tanks were also sealed with tight lids, allowing no light to filter through, and the water was bubbled with nitrogen gas or regular air (normoxia and reoxygenation).

After the experimentation, the fish were divided into three experimental groups. After they died, they were dissected for further examination.

“If you measure them in the field the blood alcohol goes up above 50mg per 100 milliliters, which is the drink-drive limit in Scotland and northern European countries,” study author Michael Berenbrink from the University of Liverpool told the BBC. “So they are really ‘under the influence.’” (McGrath, 2017)

The researchers concluded that in the absence of oxygen, the fish have a second set of proteins that convert lactic acid into alcohol. The alcohol is then dispersed through their gills.

“The ethanol production allows the crucian carp to be the only fish species surviving and exploiting these harsh environments, thereby avoiding competition and escaping predation by other fish species with which they normally interact in better oxygenated waters,” study author Dr. Catherine Elisabeth Fagernes told the BBC.

But Really, Why are Sherpas Able to Endure the Elements?