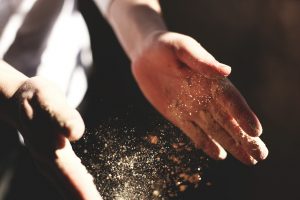 If you’ve been procrastinating on giving your house a good dusting, you might want to think about what may be floating around in the air. Researchers have now identified 45 potentially toxic chemicals in dust samples from homes in 14 different states. This would seemingly indicate that regardless of where you live, there are toxins ready and waiting to make themselves cozy in your home.

The study was published on Sept. 14 in Environmental Science and Technology. The authors found 10 harmful chemicals in 90 percent or more of dust in the samples analyzed. Most notably, the carcinogen known as TDCIPP (Tris [1,3-dichloroisopropyl] phosphate) was discovered. It is often used in furniture, toys, and other household items as a flame retardant.

But it doesn’t stop there.

A phthalate known as DEHP was found in 100 percent of samples, according to the researchers. Some scientists believe that phthalates are responsible for interfering with hormones in the body. They have also been linked to reproductive and developmental health issues. Phthalates are used in cosmetics, toys, vinyl flooring, and other products to soften plastics, make them stronger, and increase flexibility.

Phenols, which are used in cleaning products, were also detected in dust. They were the second-most prominent chemical found in the dust analyzed by the researchers.

In the end, the study concluded that TCEP – a flame retardant added to furniture, baby products, and other items – was the most likely to make its way into the system of children. In laboratory experiments, TCEP has been shown to cause tumors in the kidney and thyroid glands of animals.

As a result of the known dangers of TCEP, it is no longer produced in Europe, but it is in production in the U.S. The state of California has listed TCEP as a cancer-causing agent based on studies conducted by the National Institutes of Health’s National Toxicology Program.

So what can we do about these chemicals in our own homes?

Unfortunately, they pose a health hazard, and an even larger one for individuals suffering from conditions, such as asthma. Vacuuming carpets with a HEPA filter can help, as well as mopping hard surfaces. Even habits, such as regularly opening windows for fresh air, can make a difference.

While shopping, consumers can be mindful of products that contain flame retardants and stain guards, which may have the harmful chemicals that can eventually make their way into dust. Some toys for children may also be marked as phthalate-free.