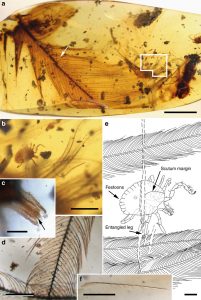 Could amber hold the key – or tick – to determining how feathered dinosaurs once lived? A new discovery is pushing the boundaries of what we already know.

Recently, scientists came across a form of ancient Burmese amber specimens that had been originally purchased online by private collectors (Peñalver et al., 2017). One of the specimens turned out to be a 99-million-year-old tick known as Cornupalpatum burmanicum.

It wasn’t the sheer existence or age of the tick that excited researchers; it was the fact that it was seemingly entangled in a plume from a feathered dinosaur.

“Here, we present the fossil record of an ectoparasitic individual in intimate association with integumentary remains of its host—a hard tick entangled in a pennaceous feather preserved in ca. 99 million-year-old Burmese amber,” the researchers wrote in their report. “Additionally, tick specimens of a new family, also found in Burmese amber, may be indirectly related to feathered dinosaur hosts due to the presence of specialized setae from dermestid beetle larvae (hastisetae) attached to the ticks, along with further evidence of taphonomic nature, both indicating resin entrapment in close proximity to the host’s nest.”

In addition to the initial discovery, the scientists also found that one of the ticks was still engorged with blood – but this wasn’t meant to excite those who had dinosaur resurrection in mind. DNA has a relatively short half-life, meaning genetic information would not be recoverable in this day and age.

Instead, the scientists hope to use their discovery to learn more about dinosaurs’ ecology. Additionally, they would like to gain a better understanding about their environment, as well as the spread of disease. It is thought that the parasite-host relationship goes back more than 300 years, but the researchers believe it will take more fossils for them to discover the actual facts.

“We don’t expect to get the oldest fossils from the fossil record,” study coauthor Ricardo Perez-de la Fuente told the Los Angeles Times (Khan, 2017). “Ticks could have been up to 300 million years old, but we don’t have paleontological evidence of that.”

And as for dinosaurs and feathers, the jury is still out – but we’re getting closer to learning more about their appearance each day. One study recently suggested that the T. rex was scaled, according to skin impressions found in fossils (Katz, n.d.). However, it’ll take many more similar fossils for us to determine how each species looked – feathered or not – during the Jurassic era.