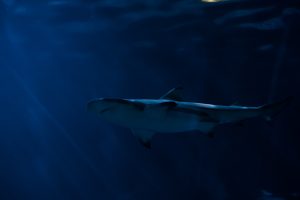 What is the world’s oldest living vertebrate? As it turns out, it just might be a Greenland shark, and it could date back to medieval times.

This is what marine biologist Julius Nielsen and his team of researchers have claimed in a new paper published in Science. The group discovered a Greenland shark, 18 feet in length, and believe that it may up to 512 years old. In the least, it is approximately 272 years old. Its birthday dates back to around 1505, according to the researchers.

They came to their conclusions by examining the size of the shark and radiocarbon dating the eye lens nuclei of the creature. The researchers compared it to more than 20 other Greenland sharks that were under examination (Nielsen et al., 2016).

“Radiocarbon dating of eye lens nuclei from 28 female Greenland sharks (81 to 502 cm in total length) revealed a life span of at least 272 years,” the researchers wrote in their report. “Only the smallest sharks (220 cm or less) showed signs of the radiocarbon bomb pulse, a time marker of the early 1960s. The age ranges of prebomb sharks (reported as midpoint and extent of the 95.4% probability range) revealed the age at sexual maturity to be at least 156 ± 22 years, and the largest animal (502 cm) to be 392 ± 120 years old.”

Nielsen went on to say that the researchers are continuing to look into why and how the Greenland shark lives as long as it does.

“Together with colleagues in Denmark, Greenland, USA, and China, we are currently sequencing its whole nuclear genome which will help us discover why the Greenland shark not only lives longer than other shark species but other vertebrates,” he told the International Business Times (Varandani, 2017).

Humans and the Quest for Everlasting Life

Could a human live for up to 512 years? There’s no evidence of it yet, but some believe that we’ve been able to reach 146 years.

A man named Mbah Ghoto from Indonesia who passed away earlier this year was reportedly born in 1870. At the time of his death, he was supposedly 146 years old. Although his age was not independently verified, there are several documents that supported the claims of his age. In an interview in 2016, he expressed his feelings on death.

“Life is only a matter of accepting your destiny wholeheartedly,” he said (Holmes, 2017). “I have wanted to die for a long time.”