We often think of the dinosaurs as the mighty rulers of prehistoric Earth. But their reign on the planet was a mere flash in the primordial pan compared to their distant cousins, the snapping turtles. Today’s snapping turtles are remarkably similar to their ancestors that appeared more than 215 million years ago, about 100 million years before the rise of the dinosaurs, and they have proven themselves to be the ultimate survivor; weathering the meteor impact that killed the dinosaurs and thriving into modernity. Interestingly, scientists cite one of the common turtle idioms when discussing the longevity of the snapping turtle species: slow and steady wins the race.

In the classic Aesop fable, “The Tortoise and the Hare,” the speeding rabbit challenges the sluggish turtle to a foot race. The tortoise sets a slow, but steady pace while the hare sprints ahead. Confident in his impending victory, the rabbit stops for a quick nap before crossing the finish line only to discover that the slow and steady turtle has inched across the finish line during his siesta. The slow and steady modus operandi of the turtle won this folkloric race and this method seems to be working well for the species in the race for evolutionary survival, too. 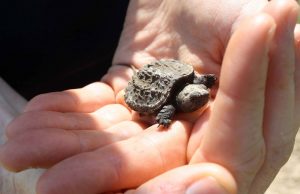 Snapping turtles, Chelydra serpentine, originated in North America and fossil records show that they have remained virtually unchanged for millions of years. This is not because the snapping turtle thumbs its reptilian nose at evolution. Rather it is a testament to the remarkable design that allowed the animal to thrive. Scientists believe this “turtling” ability is how snapping turtles survived the cataclysmic meteor that led to the mass extinction of the dinosaurs. Snapping turtles have the ability to slow their metabolism so much that they barely hover about death for as long as six months at a time, drawing in low levels of dissolved oxygen through membranes in their throat and mouths to sustain themselves, a process known as extrapulmonary respiration.

It is now believed that a large meteor, between six and nine miles across and traveling at about 50,000 miles per hour, struck the Yucatan Peninsula in southern Mexico, unleashing more than 100 million megatons of destructive energy. What animals weren’t killed in the initial impact faced an uncertain future as the meteor’s debris cloud snuffed out vegetation and turned the planet into a virtual wasteland. While larger animals fought over the dwindling food supply, the snapping turtle, somewhat protected in their aquatic environment, slowed down their metabolism and made due with the limited food.

Snapping turtles can be found today throughout the United States, southern Canada and into Mexico and Central America. They spend most of their lived in water and prefer muddy, mucky-bottomed, weed-choked ponds, streams, lakes, and swamps. As omnivores, snapping turtles eat a wide range of aquatic plants, in addition to fish, snakes, amphibians, other turtles, carrion, and birds, mostly young ducklings. 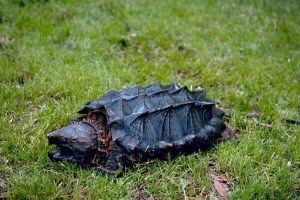 Snapping turtles are proficient hunters and earned their name by snapping at their prey or in self-defense. Rumors and urban legends often tell of snapping turtles that snap a broom handle in two with one powerful chomp, but these are most likely exaggerations. The jaws of the snapping turtle are more vise-like than axe-like. The turtle will clamp down on its victim and hold tight, slowly and steadily drowning it or mortally injuring it. Snapping turtles can be quite aggressive when cornered or caught on land, extending its long, serpentine neck to snap its way out of harm. In water, however, snapping turtles are at the pinnacle of the food chain with no predators once they reach maturity.

The snapping turtle has a lot going for it. It is an expert hunter with no predators living in an ecosystem with plenty of food sources. It has the ability to hold its breathe for six months at a time and slow its metabolism to a crawl. It has not evolved in millions of years because it hasn’t needed to. Snapping turtles have proven to us that slow and steady does, indeed, win the race.