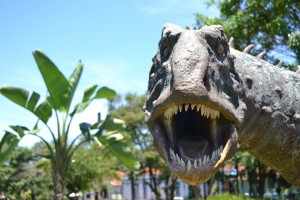 What if an asteroid hadn’t wiped out the dinosaurs and they still walked the Earth? According to a new study, the asteroid that took out some of the world’s most magnificent creatures was just shy of leaving a few of them alive.

The space rock that hit Earth about 66 million years ago was approximately six miles wide. After it hit the planet, biodiversity shrunk by approximately 75 percent. Scientists believe that asteroids such as this only hit the planet once every 100 million years or so. However, a new report claims that the impact of the K-Pg extinction (the official name for the one that wiped out the dinosaurs) was actually highly unlikely.

Kunio Kaiho and Naga Oshima, the researchers of the study, believe that the asteroid that hit Earth had little more than a one-in-ten chance of triggering a massive extinction (Kaiho & Oshima, 2017). As it turned out, they believe it was the soot from the impact that actually caused the downfall of most of the planet’s creatures. The “burning of hydrocarbons … in the target rocks by the asteroid impact produced massive amounts of soot,” according to the researchers.

But how did smog actually take out some of the largest creatures to ever walk the Earth?

Kaiho and Oshima believe that the area where the asteroid hit – the Yucatan Peninsula – had reservoirs of crude oil and hydrocarbons beneath the sea, which were simply “waiting to be set ablaze.” The soot driven into the air was enough to cloud the skies, according to Kaiho and Oshima.

“Soot spreading into the stratosphere leads to global cooling,” they wrote in their study. It’s this change in temperature and overall climate that negatively impacted the dinosaurs’ ability to thrive.

Interestingly, Kaiho and Oshima also believe that at the time of the asteroid’s impact, just 13 percent of the Earth’s surface had enough organic material to create such soot. Kaiho told the Washington Post that if it had hit a different area of the planet, such a mass extinction could have been avoided. In turn, dinosaurs could still be around today (Guarino, 2017).

“If the asteroid had hit a low-medium hydrocarbon area on Earth (occupying approximately 87 percent of the Earth’s surface), mass extinction could not have occurred,” Kaiho explained to the Post.

So should we be grateful for the location of the asteroid’s impact? Perhaps, as it’s hard to imagine sharing the world alongside some of the planet’s most fearsome creatures.