What would you do if you found out a young female in your life was contemplating suicide? New research suggests that incidents of self-harm are rising among young girls and women.

Recently, a letter published by the Journal of the American Medical Association looked at the rates of suicide among young adults (Mercado, Holland, Leemis, Stone, & Wang, 2017). Statistics showed that suicide rates among both teenage boys and girls are surging. However, the number of emergency room visits for boys between the ages of 10 and 24 (for nonfatal self-inflicted injuries) has been stable in recent years. For females, the number of visits for that age group is soaring. However, researchers are unsure of why this is the case. 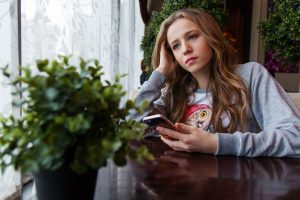 “Other potential underlying reasons for the observed increasing trends, particular among young females, warrant further study,” the authors wrote in their letter.

So why are more young women hurting themselves?

The theories vary, according to researchers. Some believe that those born after 1995 are prone to more mental health issues than millennials. Specifically, people believe that this is because teens have access to smartphones.

Jean Twenge, a psychology professor at San Diego State University, recently researched the rise of smartphones and its tie to depression in young adults. Twenge found that teenagers who spend five or more hours a day online are 71 percent more likely to have at least one suicide risk factor, such as depression or making a suicide plan, compared to teens who spent only one hour a day online (Twenge, 2017).

Regardless, there are a few ways adult caregivers can do their part to keep young adults safe. Contacting a mental health professional may be of interest for long-term care. In the event that an individual expresses any suicidal tendencies, medical attention should be sought immediately. This can be done by dialing 9-1-1 or contacting 1-800-273-TALK.