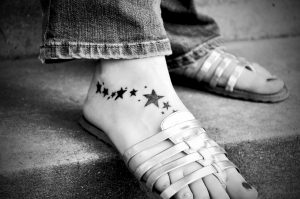 You might want to think twice before you get inked – at least for the sake of your lymph nodes. Recently, a group of researchers wanted to determine how tattoo ink is being absorbed in the body. Specifically, they honed in on particle distribution, and their results were surprising.

As it turned out, many metals that make up tattoo ink were able to make their way into the body’s lymph nodes. These metals include nickel, chromium, manganese, and cobalt (Schreiver et al., 2017).

In the past, a study in mice revealed that pigments traveled to the lymph nodes following tattooing. However, these researchers wanted to document their theory in humans. To do so, they looked at tattooed human skin and lymph nodes in four donor corpses. Inductively coupled plasma mass spectrometry (ICP-MS) was used to analyze the elements in tissues and tattoo ink after microwave digestion. Laser-desorption/ionization time-of-flight MS facilitated the identification of pigments in samples.

The sizes of particles were analyzed through X-ray investigations. The researchers also looked at biomolecular changes in tissue at a micrometric scale.

Following their examination of donors’ skin, the researchers drew a number of conclusions. First and foremost, they believe that organic pigments do in fact translocate from the skin to the lymph nodes. They were able to find the same organic pigments in tissue samples and regional lymph nodes.

Through further examination, they also concluded that the metallic elements in these skin tissues could be linked to tattoo ink. Particle size varied between pigment species.

Finally, the researchers now believe that tattoo particles can induce biomolecular changes. So does this mean that we should all avoid being tattooed (Daley, n.d.)?

Despite their findings in the lymph nodes, the researchers still noted that further experimentation needs to be done to analyze how other internal organs are affected by tattooing.

“The outcome of these investigations not only will be helpful in the assessment of the health risks associated with tattooing but also in the judgment of other exposures such as, e.g., the entrance of TiO2 nanoparticles present in cosmetics at the site of damaged skin,” wrote the authors of the study.

For now, you can go ahead and get inked, but don’t be surprised to hear more about supposed risks as scientists continue their deep dive into this cosmetic trend.