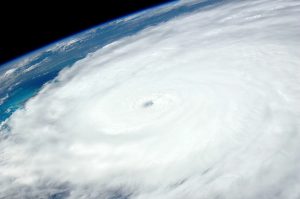 Several strong hurricanes have made landfall over the past few months, leaving destruction in their wake, but what else are they triggering? Could they be responsible for seismic activity?

We wanted to learn more about the data recently captured by seismometers amid some of the season’s strongest storms. For insight, we spoke to Stephen Hicks, a postdoctorate researcher at the University of Southampton. Hicks focuses his research on seismology, so who better to ask?

Can you explain in layman’s terms why hurricanes like Irma have the ability to register on seismometers?

“If we look at the frequency content of seismic data from any monitoring station, noise levels light up at frequencies of ~0.2 Hz (5 s period). We call these hums “microseism”. Microseism comes from persistent seismic waves unrelated to earthquakes; this phenomenon occur all over the globe. One of the strongest sources of microseism is caused by ocean waves and swell, so monitoring stations located on islands are more susceptible to microseism. During a hurricane, swell increases and ocean waves become more energetic, eventually crashing into coastlines, transferring seismic energy into the ground. This effect is more obvious on islands. As the hurricane gets closer to the island, wind speeds dramatically increase and may dwarf the noise level of the longer period microseism. Wind rattles trees, telegraph poles, and the surface itself, transferring seismic energy into the ground and moving the sensitive mass inside the seismometer. This causes higher-frequency ‘rustles’ as the center of the storm approaches. Gusts of wind can also generate pressure changes inside the seismometer installation and within the seismometer itself, generating longer period fluctuations.”

“Yes, the higher the noise level, the harder it is to see small to moderate sized earthquakes. Seismic waves from earthquakes occurring at local to regional scales may contain frequencies similar to those caused by storms, so it can be difficult the separate the two effects. Earthquakes produce distinct packets of energy that last from seconds to hours, which is different to hurricanes that produce energy on timescales of days to weeks. So we can use this difference to detect earthquakes.”

How often do seismometers pick up strong storms? Is there a threshold (e.g., winds of a certain strength) that has to be met?

“This is difficult to say as the detection limits of a seismic station depend on many factors – including the sensitivity of the instrument, the installation site and the depth of the installation. Even in the UK, when winter storms pass, which are considerably weaker than category 5 hurricanes, across the Atlantic, we are able to detect them on the UK seismic network.”

Is the storm data recorded by seismometers useful in any way?

“In a quantitative way, probably the seismic data is not so useful for hurricane forecasting because the observed noise level can be attributed to so many factors. Nevertheless, given that seismometers tend to be buried below the surface, they may withstand adverse weather conditions more than external meteorological instruments (e.g. wind, pressure sensors). So, assuming the seismometers still receive power and are able to communicate real-time data, they may be useful in determining the approximate path of a storm moving over a particular location and possibly even to delineate the location of the eye of the storm. Using data from a station on the Dutch territory of St. Maarten, we were able to track the approximate location of the eye by observing the noise level gradually increase to a maximum. Then, the noise level dropped a little – we assume this was due to the calmer conditions and lower pressure inside the eye. Unfortunately, the station then went offline.”

‘Grey Swan’ Cyclones to Become More Likely, But What Are They?