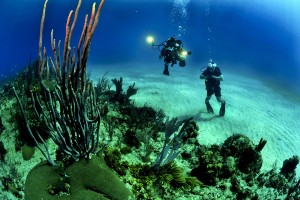 There has been a lot of news about coral reefs lately, and it hasn’t been positive. Most notably, research has found that global warming may be contributing to the bleaching of reefs around the world.

Now, new data suggests that our sunscreen could be harming coral reefs, too. Researchers from around the world have determined that oxybenzone, a UV-filtering compound found in sunscreen, is present in high concentrations around Hawaii and the Caribbean’s coral reefs.

And the news goes downhill from there.

The chemical kills coral and it causes DNA damage in adults. Furthermore, humans may be the problem — the highest levels of oxybenzone were found near reefs that have the largest amounts of tourists. This means that after you slather on your sunscreen, it’s likely washing off into the ocean.

“Coral reefs are the world’s most productive marine ecosystems and support commercial and recreational fisheries and tourism,” said John Fauth, one of the scientists who took part in the research. “In addition, reefs protect coastlines from storm surge. Worldwide, the total value of coral reefs is tremendous. And they are in danger.”

The research also sheds light on scuba diving and those who may bring oxybenzone directly into contact with coral reefs. In tests, cells from seven different species of corals were killed by the chemical at concentrations similar to those found in the wild.

“Wear rash guards or scuba wetsuits and skip all the hygienic products when you go diving,” Fauth continued. “If we could do it for a week at a time, people can certainly forgo it for a few hours to help protect these reefs for our children and their children to see.”

And as for sunscreen?

Some environmental experts say that it should be your last resort due to the number of chemicals in its formula. Instead, many recommend staying out of direct sunlight, especially when the sun is at its highest in the sky.

A report analyzed by EWG for the creation of the 2015 Sunscreen Guide found that 80 percent of the 1,700 sunscreen products tested included ingredients, such as oxybenzone or vitamin A. This vitamin is thought to increase the development of skin cancer.

Of course, any dermatologist is likely to tell you that it’s best to protect yourself in any way you can from the harmful rays of the sun. How you choose to do so is up to you.