In just 60 years, the microwave oven morphed from a $5,000 refrigerator-sized model used mostly in restaurants to a countertop-sized model so affordable it’s found in about 90% of kitchens nationwide. It’s not just the price tag that’s improved as microwaveable foods once known for high sodium and low nutritional value now include healthier options in the form of steam-in-bag veggies and snacks.

Its invention is often called an accident but it’s really more like a happy surprise, proving that keen observation and curiosity still get results.

The name “microwave oven” is based on its use of short, low frequency radio waves ─ conveniently called “microwaves” ─ to heat food. Microwaves are short kinds of radio waves, but compared to the rest of the electromagnetic spectrum are long and have a low frequency. Unlike visible light waves, we can’t see microwaves.

In 1945, war-time technology focused on the use of radar to detect enemy planes. Raytheon radar expert Percy Spencer was noodling around with a magnetron, a special kind of radar tube that uses magnets to generate radio waves. While standing near an active magnetron, Spencer noticed that the candy bar in his pocket melted. Spencer and his curious gang of radar scientists naturally wondered what else they could heat up and aimed the magnetron at other foods. They tried popcorn, leading to the first office conflict over burnt popcorn smell, and an egg, which exploded. All subsequent experiments were smartly moved to an enclosed box, to which Spencer attached a generator and the first microwave oven was born. Soon after, Raytheon filed a patent and developed the first commercially available model called the “Radarrange.”

So, what exactly happened that day? It has to do with water. Take a few steps back to chemistry class and recall that water molecules are dipoles, meaning they have both positively and negatively charged ends.

In an electromagnetic wave, electric and magnetic fields are constantly alternating so that any charge exposed to it will experience forces constantly changing direction. Inside each microwave oven, a magnetron generates microwaves. Food is filled with water molecules that try to line up with the microwaves’ electric field. All of that switching and moving around, known as agitation, leads to a transfer of energy among water molecules, a rise in temperature, and heat that cooks your food. The delightful thing about microwaves is they produce heat without causing atoms to become unstable. That would be bad. Your food would become radioactive.

Through experimentation, it became apparent that it’s faster to cook with microwaves than with a conventional oven. In a conventional oven, food is cooked by conduction in which heat transfers molecule by molecule along a temperature gradient, from the outside of your food to the cooler inside. In a microwave oven, heat is evenly distributed and all food particles heat up at once. Microwave ovens are also incredibly energy efficient. Microwaves pass safely through plastic, glass, and ceramics and there are no mechanical parts that heat up. The only thing that gets hot is your food.

Because they emit radiation, people often wonder if microwave ovens are safe. While there isn’t really a good reason to get up close and personal with your microwave oven, the level of radiation emitted is too low to harm you if you do. Microwave ovens are built to keep its rays inside. Also, remember that microwaves don’t destabilize atoms; scientifically speaking they’e non-ionizing waves. Their frequency is pretty low on the electromagnetic spectrum and it’s the higher frequency rays like gamma and x-rays that do hard-core stuff like break up atoms and free electrons.

Concerns have surfaced, too about leakage of chemicals from plastic containers, plastic wrap, and Styrofoam when heating up food. Leakage is serious business, monitored, tested, and regulated by the Food and Drug Administration (FDA). Plastics manufacturers must prove that their products meet FDA standards for leakage when exposed to microwaves. Those that pass the test are stamped with a special icon and/or the words “microwave safe.” Always check before placing any container in the microwave that it’s safe to do so. Absolutely avoid placing any metal containers or utensils in microwave ovens. Metal reflects radio waves rather than absorbs them; the insides of microwave ovens cleverly have metal screens in the door to keep those waves inside. An excess of unabsorbed microwaves can burn out the magnetron or kill the oven. Some microwaveable packaging does include small amounts of metal that act like a frying pan. Those packages include very specific cooking instructions, like microwaveable popcorn’s ubiquitous “THIS SIDE DOWN.”

One last risk with microwave ovens is superheating. Superheating occurs when a liquid is heated very quickly to a temperature higher than its boiling point, without time to release steam. The liquid becomes unstable and introducing any substance to it, e.g. instant coffee or a spoon can cause the liquid to boil forcefully and seriously burn you. It’s advisable not to use your microwave oven to boil water. 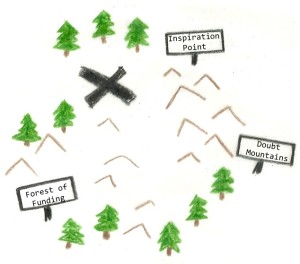 The microwave oven’s history can inspire as well as frustrate us investigative types. It hints that there’s more out there waiting to be discovered, but lacks the road map to where “there” is. Sometimes it just happens. Other times, science inspires improvements on existing designs. On the market today are smart microwave ovens that use temperature-sensing technology to detect when food is cooked and sound technology to avoid burning the popcorn.

For every accident of science, there’s another story of dedicated experimentation, endless trials, and a worn path back to the drawing board. Don’t give up; science rewards both curiosity and perseverance, occasionally with awaited results and other times with useful surprises.

Find yourself wondering a little more about the microwave? See if you can answer these questions: