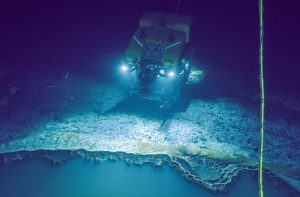 Taking a dip in a hot tub is one thing, but walking into a “Jacuzzi of Despair?” It doesn’t sound as pleasant. This is what scientists are calling a lake found under the ocean in the Gulf of Mexico. Just as it name sounds, the lake acts like a Jacuzzi that sucks creatures into it if they inch too close.

The “crater-like” pool is about 10 feet above the seafloor. It has brine pouring out of one side, giving it the appearance of a waterfall. The water in the “Jacuzzi” is up to five times saltier than the actual ocean around it, and it’s twice as warm. Within the brine, scientists saw methane bubbles rising toward the surface.

“Our preliminary analyses confirmed that this brine pool was saturated with methane,” the researchers wrote in their report. “Ongoing analysis of this experimental spectral data, together with high-resolution three-dimensional mapping, will provide a more detailed picture of the physical and biogeochemical processes at work in these extreme environments.”

For now, one thing is certain – the “Jacuzzi” is fairly toxic, yet it thrives in the Gulf. As scientists conduct further research into the pool, they will be able to better understand how nearby creatures survive adjacent to the dangerous structure.

“It was one of the most amazing things in the deep sea,” Erik Cordes, associate professor of biology at Temple University in Philadelphia, told Seeker. “You go down into the bottom of the ocean and you are looking at a lake or a river flowing. It feels like you are not on this world,” he told Seeker.

Creatures of the ‘Jacuzzi’

Thus far, the scientists have found that bacteria live near the “Jacuzzi.” The rim of the crater-like structure was full of deceased deep-sea crabs that met their demise, looking for food in the pool. Large mussels were spotted feeding off of the hydrogen sulfide and methane gas around the “Jacuzzi,” and specially adapted shrimp and tube worms seemed to be happily living nearby.

“It’s warm, but super salty,” Scott Wankel, a biogeochemist at the Woods Hole Oceanographic Institution, told Seeker about the pool. “When [creatures] fall in they die and get pickled and preserved.”

Scientists believe that the pool could be luring creatures with its temperature of 65 degrees Fahrenheit, which is more comfortable compared to the 39-degree Fahrenheit temperature of nearby waters. Can you blame them?