Dinosaur discoveries always give us more to consider when we look back on the evolution of today’s animals. The recent unearthing of 19 skeletons in the Gobi Desert of China is no different.

On Dec. 22, scientists published new findings in Current Biology, detailing 19 skeletons they found while searching in the Gobi Desert. The 160 million-year-old bones included pieces that provided insight into the dinosaurs’ jaws. The scientists believe that some of them might have had teeth, but others had what looked like beaks.

They drew their conclusions after determining the age of the dinosaurs by the deposit growth rings in their bones. Similar to a tree, the bones grew new layers as the creatures aged, developing a ring-like effect. 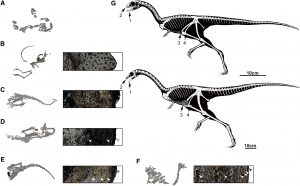 “Our discovery has significant implications for understanding the evolution of the beak, an important feeding structure present in several tetrapod clades, including modern birds,” the authors wrote in their report. “This radical morphological change suggests a dietary shift, probably from omnivory for juvenile Limusaurus to herbivory for adult Limusaurus, which is also supported by additional evidence from gastroliths and stable isotopes.”

The more mature dinosaurs seemingly had beaks and no teeth, according to the scientists. The young ones appeared to have teeth, which would have been more suitable for a carnivorous diet.

James Clark, study co-author, told the Christian Science Monitor that he believes the adults would have likely eaten plants. The adults also had rocks in their gullet (known as gastroliths), which today’s birds use to help with digestion. These might have been beneficial to adult dinosaurs that primarily ate grains and other plants.

“Who would have thought that a dinosaur would start off with teeth and then replace them with a beak when it became an adult?” said Stephen Brusatte, a paleontologist at the University of Edinburgh who was not involved in the research, while speaking to the Monitor. “The change in anatomy seems to have enabled this dinosaur to change its diet as it grew, which probably allowed juveniles and adults to live together without competing for food.”

However, the mystery between dinosaurs and today’s birds continues to linger. David Fastovsky, a paleontologist and chair of the department of geosciences at the University of Rhode Island, notes in the Monitor that the structural genes that code teeth are shut off before the heads of birds form.