When archaeologists stumble upon a new dinosaur fossil, they never know what they’ll turn up. In some cases, they are fragmented remains that are difficult to analyze. In other instances, the fossils are in impeccable condition. Needless to say, researchers always hope for the best, and that’s exactly what they recently found in Montana. (Arbour & Evans, 2017)

Researchers from the Royal Ontario Museum were working in the Judith River Formation in northern Montana when they stumbled upon the remains of a new species of ankylosaurine dinosaur, now named the Zuul crurivastator. The researchers called it an “exceptionally complete and well-preserved skeleton.” It was the first ankylosaruin skeleton to come with a complete skull and tail club. Furthermore, it was the most complete ever discovered in North America.

“The presence of abundant soft tissue preservation across the skeleton, including in situ osteoderms, skin impressions and dark films that probably represent preserved keratin, make this exceptional skeleton an important reference for understanding the evolution of dermal and epidermal structures in this clade,” the authors wrote in their report.

Interestingly, ankylosaurians are not typically known for originating from the Judith River Formation. When they are, they are only traced back to the area through isolated teeth and bones. Now that researchers have a more complete fossil, they are looking forward to better understanding how the creature evolved over time. 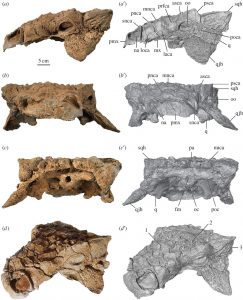 If the name Zuul sounds familiar, it’s because the dinosaur was named after the villain from the “Ghostbusters” film.

“Me and my co-author David Evans were batting around ideas for what to name it, and I just half-jokingly said, ‘It looks like Zuul from Ghostbusters,'” paleontologist Victoria Arbour told CBC. “Once we put that out there we couldn’t not name it that.” (Riva, 2017)

Finding a Dinosaur “On Accident”

Believe it or not, the dinosaur – better known to researchers as ROM 75860 – was discovered by accident back in 2014.

“ROM 75860 was discovered accidentally on 16 May 2014 during overburden removal for a scattered tyrannosaurid skeleton, when a skid-steer loader encountered the tail club knob,” the researchers wrote in their report. “It was found approximately 10 m from the edge of the exposure, and beneath more than 12 m of overburden.”

Considering it was subject to more recent surface erosion before it was found, the archaeologists were shocked by its pristine condition.

But the discoveries didn’t stop there.

“The quarry also produced the remains of numerous other taxa, including turtles, crocodilyforms, theropods, hadrosaurids, invertebrates and plants,” the authors note. “Like ROM 75860, these fossils also represent some of the best preserved and most complete examples of their respective taxa from the Judith River Formation and will be described in future publications.”