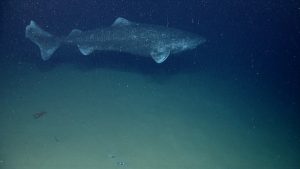 What if you could live up to 400 years? You would undoubtedly see an enormous amount of history pass by, and that is exactly what the Greenland shark has done.

A study published in the American Association for the Advancement of Science’s Science journal shows evidence of a 400-year-old shark living comfortably in the North Atlantic. To determine the age of the creature, scientists used radiocarbon dating. They tested the sharks’ eye lenses that had been harvested through creatures snagged in fishing nets.

Typically, scientists do their research into the ages of fish by examining their ear bones, which show a pattern of rings that can be counted (similar to the rings of a tree). However, sharks can be more challenging, and researchers typically observe calcified layers of tissue on their backbones, instead.

Originally, the Greenland shark researchers did not think that the animal’s age could be determined, as its growth layers are typically deposited, rather than calcified over time. Eventually, they concluded that the Greenland shark’s eye – composed of specialized materials and proteins – could potentially be the key.

“After the proteins have been synthesized in the body, they are not renewed anymore,” lead author Julius Nielsen, a marine biologist from the University of Copenhagen, told the BBC. “So we can isolate the tissue that formed when the shark was a pup, and do radiocarbon dating.”

One female Greenland shark was as “young” as 272 years and as “old” as 512 years. In turn, the scientists developed the estimated average age of 400 years.

“Even with the lowest part of this uncertainty, 272 years, even if that is the maximum age, it should still be considered the longest-living vertebrate,” Nielsen continued.

Interestingly, the analyzed Greenland sharks also did not appear to reach sexual maturity until around 150 years of age.

But is the Greenland shark really the longest-living creature on the planet?

As it turns out, it depends on the creature. The Ocean Quahog, for example, a type of clam that can also live around 400 years (the oldest, named “Ming,” reached 507 years old). Other elderly statesmen include Koi fish (~200 years), Galapagos tortoise (~150 years), and the Bowhead whale (~200 years).

And if you want to take it a bit further, the Turritopsis Dohrnii is virtually immortal. It can turn itself into a blob-like cyst and develop a polyp colony (the first stage of a jellyfish). Through asexual reproduction, it can develop hundreds of genetically identical copies of itself.