Imagine ordering a fruit smoothie only to find out it is made with bell peppers, squash, tomatoes, eggplant, peas, olives, and corn. Ewww. While not the sweet treat you expected, the restaurant didn’t make a mistake. Technically speaking, you got what you ordered…a mixture of blended fruit. This misunderstanding stems for our muddled classification of what makes a fruit and fruit and what makes a vegetable a vegetable and what makes a berry a berry. The trouble started because people started labeling produce as either fruit or vegetable long ago, long before scientific classifications based on plant structure, growth, and reproduction. The layman’s classification has stuck around and, today, confusion remains over the botanical classification of fruits and vegetables. Let’s clear the air so you don’t find eggplant in your berry cup.

Back in 1893, the United States Supreme Court ruled anonymously on the debate in the Nix v. Hedden case. At the center for the case was the humble, yet controversial tomato. Clarification regarding the tomato’s status as either a fruit or a vegetable was needed for taxation purposes. The Tariff Act of March 3, 1883, signed into law by President Chester A. Arthur, required a tax on all imported vegetables, but not on fruits. John Nix, the founder of New York City’s largest produce seller, sued Edward Hedden, the tax collector for the Port of New York, for repayment of taxes collected on imported tomatoes, arguing that they are, botanically speaking, a fruit. Lawyers for both sides cited dictionary definitions, scientific taxonomy, cookbooks, and common usage in their arguments. Turning their backs on science and botany, the Supreme Court Justices unanimously agreed to give the tomato the label of vegetable, based primarily on the usage of the tomato and evidence that tomatoes are viewed as vegetables in the common vernacular.

The thing is, the Supreme Court got it wrong. From a botanical standpoint, a fruit is a seed-bearing growth that has been developed from the ovary of a flowering plant. That is what a tomato is. Conversely, a vegetable is any other edible part of a plant, including the flowers, leaved, roots, and stem. Adding to the confusion are berries and beans, which we will get to soon.

Culinary usage, however, divides produce along flavor lines. Anything that is sweet in flavor and commonly used to make desserts have been called fruits, while produce with a savory flavor and served as a meal’s main or side dish, was labeled a vegetable.

It is this clash between plant reproduction and botany versus flavor and usage that has led to our current befuddlement in the produce aisle of the grocery store. But if we examine the botanical definition of fruit, we see that squash, peas, pumpkin, and avocados all join apples, peaches, bananas, and, yes, tomatoes on Team Fruit. 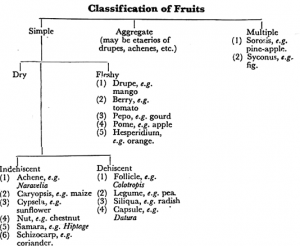 Team Fruit, however, can be divided into four subgroups, which themselves, can be confusing and subject to confusing nomenclature (plot twist – a strawberry is not a berry!). Drupes are fruits with one seed encased in an endocarp that is surrounded by fleshy pulp. Pitted fruit, such as peaches, plums, and olives, fall into this category. Pomes have many seeds in fleshy tissue, surrounded by a pericarp. Pears and apples are pomes. Berries have several seeds that are individually surrounded by a pericarp, such as grapes, tomatoes, and eggplant. Hesperidia have leathery rinds, and include cantaloupe, squash, and cucumbers. Citrus fruits, like lemon, oranges, and grapefruit, are a special kind of hesperidia, categorized by their segmentation and acidity.

Berries are comprised of three parts, or layers. The exocarp is the outer skin of the berry. The endocarp is the part at the very center of the berry that holds the seeds. The mesocarp is the fleshy part that is in between the other two layers. Despite their misleading names, strawberries, raspberries and blackberries don’t meet these standards. A banana, grape, and eggplant, however, do.

Membership into the Berry Club has a few other stipulations. A berry, in order to be called a berry, must have more than one seed. So a cherry is not a berry…it is a drupe. Plus, a berry must develop from one flower that has one ovary. Peppers, cranberries, blueberries, kiwis, and eggplants meet this requirement, but strawberries and raspberries do not. They develop from blossoms with more than one ovary.

Beans, like berries, are often confusing. We serve them like vegetables and even mix them into our stews and soups, however they are a great source of plant-based proteins so they are often groups with meat and poultry on the USDA’s food pyramid. Botanically, beans and peas are fruits because they come from the seed-bearing growth formed from an ovary, either on the plant’s stalk or on its roots. But they are in the legume subgroup. Legumes are edible seeds formed inside a seed pod. Peas, beans, peanuts, and lentils are all legumes, making them all fruits. Nuts, in general, are on Team Fruit, with a few exceptions. Almonds and cashews, for example, are seeds.

Team Veggie is a lot less complicated. Vegetables are any edible part of a plant that is not a fleshy growth from an ovary vai al sito. With broccoli and cauliflower, we are consuming the flowers or buds. Green onions and celery give us edible stalks or stems. We eat the leaves of several plants, including spinach, kale, and lettuce. The roots of many plants, such as potatoes, carrots, onions, and beets, are deliciously edible.

The takeaway from all this is that everything you thought you knew about fruits and vegetables might be way more complex than you ever knew…bananas are berries, but strawberries are not. Peanuts are protein-packed fruits. Olives are akin to peaches. It doesn’t matter if a produce item is sweet or savory. Cherries and avocados are similar. And the Supreme Court – at least in 1893 – felt that cookbooks were more accurate than scientific classifications. This should make your next trip to the produce aisle of the grocery store more interesting for you.

Can You Really Wash Away Pesticides from Fruits and Veggies?