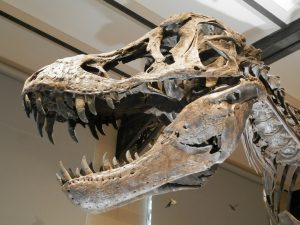 We know that dinosaurs preyed on one another when they roamed the planet, but we haven’t always had strong evidence of how the food chain may have worked millions of years ago. Now, one dinosaur “bite” is helping researchers gain a glimpse into what it might have been like to live in a “Dog Eat Dog” world.

Recently, Patrick Randolph-Quinney and his colleagues took a look at the remains of an herbivorous dinosaur from China. Their dinosaur, a Lufengosaurus huenei, would have lived approximately 200 million years ago in what is now the Yunnan Province of China (Randolph-Quinney, 2018). It was about six meters in length and weighed slightly under two tons when it roamed the earth.

The dinosaur was initially excavated in 1997, but scientists quickly noticed a pathological abnormality on one of its right ribs. From the side, there appeared to be a concave section of missing bone, which cut almost halfway through the rib.

“The osseous abnormality is located on the third right rib of YX V003; no other osseous lesions or pathological traces were identified elsewhere on the partial skeleton,” explained the authors in their report. “The rib is complete and has a chord length between the dorsal and ventral ends of 394 mm, with an overall circumferential (curve) length of 452 mm (Xing, 2018).”

To get to the bottom of what may have caused the strange defect on the creature, the scientists turned to X-ray micro-computed tomography, or micro-CT, to take a deeper look at the structures of the dinosaur.

After analyzing the results, the researchers concluded that the creature was not only attacked by another dinosaur, but likely endured an infection as a result. The wound itself though may have been caused by either a sharp tooth or claw – it’s up for debate whether the attacker used its mouth or claws to prey on the Lufengosaurus huenei.

And as for which dinosaur attacked the gentle giant, that is also still up for debate. The researchers are leaning on the Sinosaurus, a large-bodied predator that would’ve been able to match up in size to the Lufengosaurus huenei. However, the dinosaurs took all of their secrets to their graves, so we may never really have a clear answer.