Pick up a marker, and you’re writing in colour. The word “chromatography” is descriptive as it translates to “colour writing” from the Greek roots. But a simple marker is not as simple as you think. The primary colours are, but what about that orange marker? The purple? The green? That’s where things start getting interesting.

Primary colours to a whole rainbow

Primary to secondary and intermediate colours

Primary colours are red, blue, and yellow. When you have those colours, you can make nearly anything. All you need to do is mix them in ratios that subtly change the look. In general a roughly 50/50 mix of two colours will result in a secondary colour. However, what if you don’t mix them in equal ratios?

For example, take yellow and blue. If you start with a few drops of yellow paint and a lot of blue paint, you’re likely going to end up with something that looks more blue-green. That’s because the blue will lighten just a little, and not quite reach the green. However, if you have a lot of yellow and add just a tiny amount of blue, you’ll end up something more like yellow-green.

Beyond secondary into the tertiary colours

Secondary and the intermediates on the way are just the beginning. There are a lot more options and colours in the rainbow than that. Tertiary colours are ones that take intermediate or secondary colours and mix them. The chart above gives a few examples. You can follow the thinner lines to see how those are connected to one another. Yellow and yellow-orange, for example, can make a light, earthy brown.

You Can Reverse The Mixing With Chromatography

When you pick up a marker, it’s already pre-mixed with a combination of primary, intermediate, or secondary colours to create the unique colour in your hand. Most people come across this accidentally when they leave a notebook out in the rain. Granted, most of the time it’s not nearly as artistic.

It’s kind of like water painting, but instead of on a dense paper, chromatography takes advantage of a few things like capillary action to create a spreading effect of the colours. As the water spreads, so do the ink colours. That’s when the secret formula is revealed.

The science of Chromatography

There are two parts to this: movement and size of molecules. First, we’ll talk about phases, then we’ll talk about how the molecule size impacts your results. There are three different types of chromatography: paper, column, and gas. Each one has their own uses beyond colour chromatography, but what you are about to read is the general science concept behind each one. The lab that follows is a paper chromatography that is easy to demonstrate to children on a budget since no truly special equipment is needed.

This can be shown with a paper towel as we place it on water. The water will soak into the towel, sucking it up and the water moves out. It can also be demonstrated with a celery stalk. Notice how the coloured liquid is being pulled up the celery stalks through tiny little tubes to colour the leaves. (Reproduce this experiment by putting slightly withered celery stalks into a small amount of water coloured with food dye.)

The bigger the molecule, the more it weighs. The more it weighs, the less time it stays in mobile phase, so it will be one of the first to start dragging along the stationary phase. In the illustration below, this is represented with the red being heavier than the yellow or green. It will fall out of the liquid (mobile phase) and start skimming along the solid (stationary phase). If the yellow falls out of the mobile phase while the red is still skimming along, you’ll find the secondary colour of yellow or the immediate colours between red and yellow.

The same thing happens with the green. This would continue until all colours have left the mobile phase, so you’ll see a nice spreading of what the colour is made of.

What are you waiting for? Download the lab below and explore what’s in your markers. 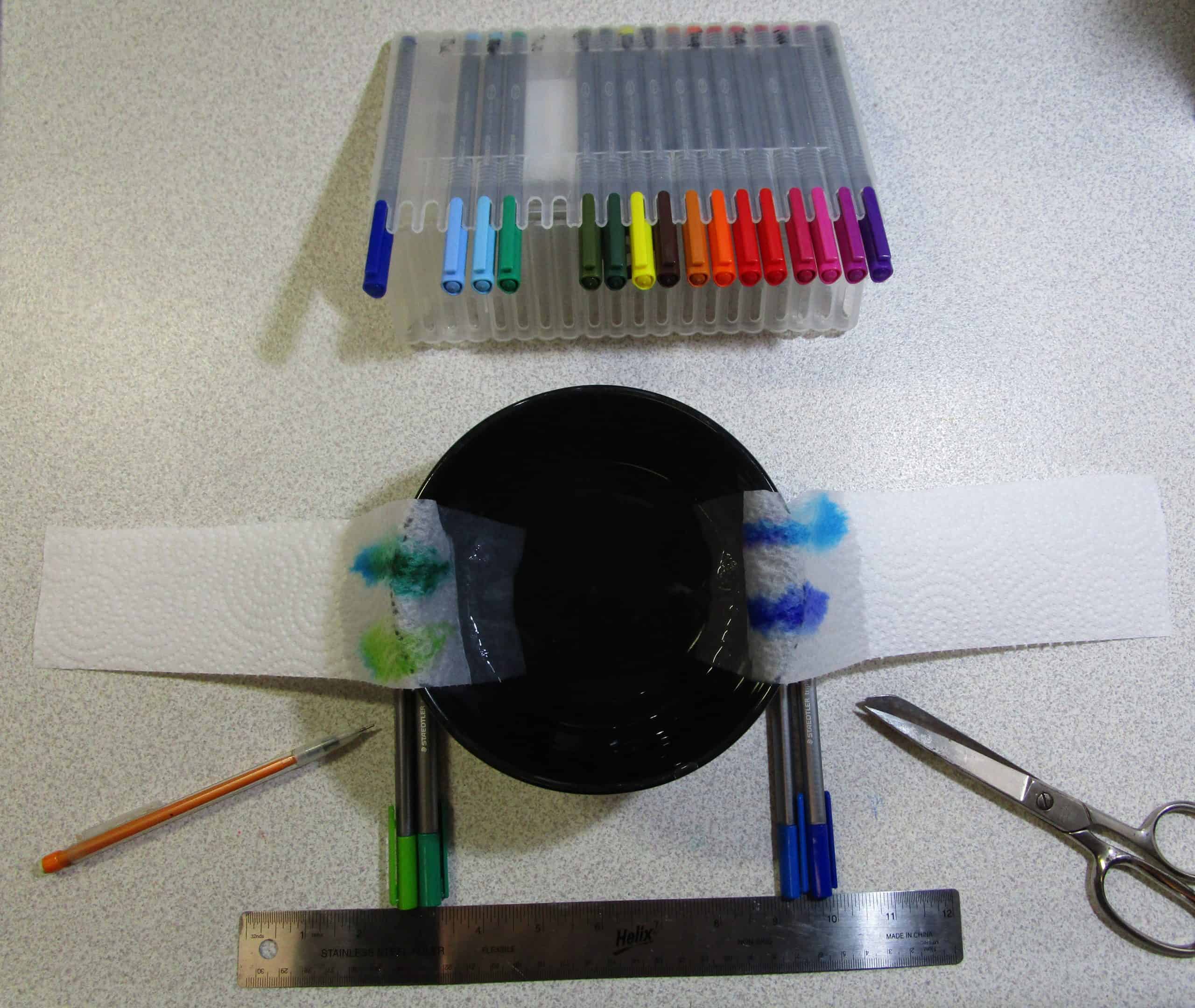 Drop your email below to get the hands on science lab printable you can use over and over again AND a few suggestions on how to focus activities for levels of learning. You’ll also have access to our entire library of resources you can use any time. 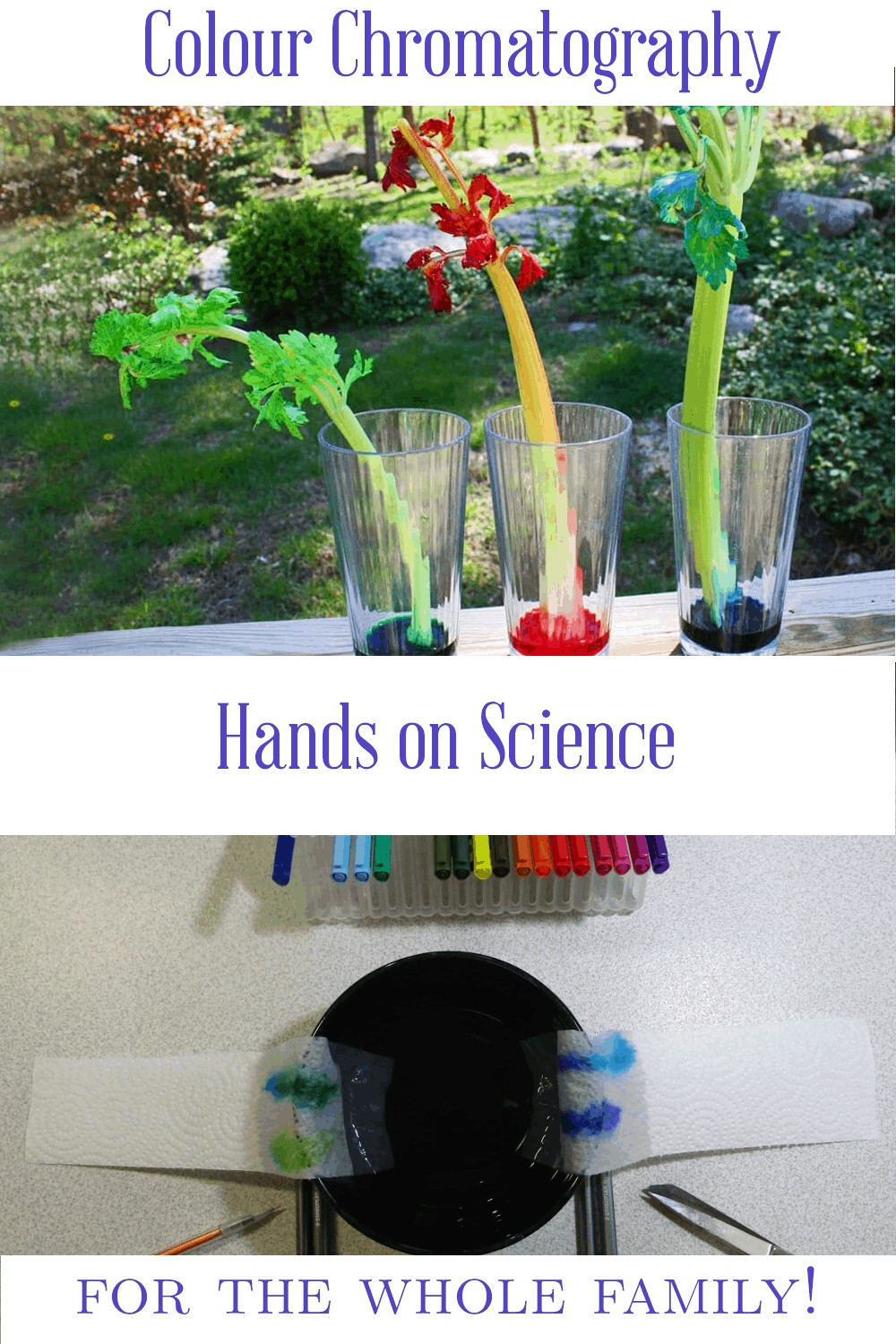 Psychology, colour, branding, and you

How A pH Indicator Works