In the early months of 2014, news headlines screamed warning of an epidemic sweeping through West Africa. The Ebola virus spread through Sierra Leone, Liberia, Guinea, and several other countries before a case was reported on American soil and the disease received much more attention from residents of the United States.

Ebola may not receive as much media coverage as before, but we all know that it is still a very real issue. The epidemic is still not over. There have been more than 24,000 reported cases of Ebola, resulting in approximately 10,000 deaths in nine different countries. However, we have also seen that it is possible for individuals to recover. We have tools and resources to treat Ebola, so why is it taking so long to manage? The answer is that Ebola is a virus and just like any other virus, it has the ability to mutate. 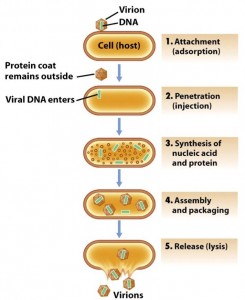 As a natural defense mechanism, viruses alter their own genetic material over time to make themselves resistant to any force that threatens their vitality. Viruses reproduce by injecting their DNA or RNA into a host cell and using that cell’s natural reproduction methods (transcription/ translation) to copy their viral genetic material. When the viral genes are copied, more infected cells are created and spread throughout the body. The immune system detects the virus and acts to destroy it and block it from attaching to more cells. If the virus has already built up fortitude, it can altering its genetic code, effectively “masking” its identity so that the structures of the immune system do not recognize them as foreign and harmful organisms. This allows it to avoid blockage from the immune system and continue replicating.

All viruses mutate, but in a manner aligning with survival of the fittest, the most beneficial mutations are carried on to later generations, making the virus stronger and more resistant to treatment. This is the same reason why scientists develop a new flu vaccine each year. The genetic sequence or “strain” of the flu is different year to year because the flu virus mutates often enough that your immune system cannot recognize it a year later. One of the differences between the flu virus and Ebola is that the flu’s mutation rate is slow enough that scientists are able to develop vaccines that should protect from that year’s most prevalent strains.

Currently, Ebola is spread through direct contact with infected blood or body fluids, but many people fear that it will become airborne. Obviously, this sort of mutation would make the virus extremely transmittable and more deadly, but there are several reasons why this genetic alteration is unlikely. First, viruses have been around since the beginning of time and they have always mutated during replication. Although viruses constantly undergo mutation, most of the changes do not affect the virus. Only when multiple mutations occur simultaneously and in an exact sequence do viruses experience any change at all. Second, the procedure by which the Ebola virus spreads through a population already works well. Transmittance by direct contact effectively allows the virus to persist, so there is no need for it to mutate enough to alter this method. Viruses can mutate to change how they spread infection, but it is not an overnight change. Specifically for Ebola, a change of this magnitude would take a multitude of mutations in very specific sequences of the virus over several thousands of years. According to a study conducted by the CDC, 97% of genetic material in the Ebola virus is exactly the same as original samples from its discovery in 1976. There is a significant gap between Ebolaâs current method of infection and the state of airborne illness, such that concern and efforts are better targeted toward research and treatment of the diseaseâs present existing state.

The Disease as We Know It

Ebola has been shown to be a stable virus, with a relatively constant mutation rate and no evidence that it is becoming more contagious or more easily spread. Although the mutation in the Ebola virus has made it resilient and pervasive, we need not be overly concerned about an apocalypse-type outbreak because genetic analysis has shown that the virus has mutated over time in a similar way as that of past, smaller outbreaks. When the West African outbreak occurred, many reports suggested that the virus was mutating twice as fast as previously observed outbreaks, but recent studies have shown that that is not the case. Mutation rate of the virus remains constant and and few strain variances have been observed. This epidemic, though the largest to date, was not caused by a more lethal, faster replicating, or more transmissible strain than previous occurrences.

Now that scientists have had several months and more cases to study, knowledge of trends and a typical mutation rate are being used to develop vaccines and drugs that will prevent and treat the disease. Research has given us the tools to form appropriate outbreak response and to make important decisions regarding the health of the population but the fact still remains that the Ebola virus will always present a threat until it is eliminated completely.

Why Ebola is Not Likely to Become Airborne. (2015, April 30).Â Centers for Disease Control and Prevention.

Is the best weapon to fight cancer already inside you?