This book review is part of an ongoing effort to help the homeschool community find fun, informative, and valuable books to add to their curriculum. I obtained this a copy of this book from one of the homeschooling mother’s we work with and was charged with both evaluating it and coming up with questions to ask her children.

I read the book with this in mind, but the rating is true to how I personally feel about the book. Without much ado, I present you with:

I must start out with honesty. While I read this book as an educator, for the purpose of homeschool students to use as a history text, I did not really enjoy the book. It was a narrative with lots of pictures, an easy read, and fairly interesting. I’m more of textbook girl after a dozen years in higher education for the depth they go into. Despite of this, I found it not quite what I expected for a comic book, and not in depth enough for a history book. Hence, it’s probably perfect for young students that want a lighter version of WWII historical events.

But that does not effect it’s level of educational value. If I was to grade on that, I would say it’s a 5 star book for students with a little bit of WWII history under their belt. There are notes of politics, technological advances, important battles, and even a handful of important people. And, it’s written in a way that is easy to follow without being overwhelming for those that don’t have a mind for names and dates.

There is a lot of information in here about the technology of planes and the people who flew them or the leaders that directed them. Most impressive is how Vansant shows the reader what the significance of this or that feature added to any particular plane or the decisions made by the leaders. For example, Vansant noted that Adolph Galland was worried for Germany because he saw that Americans had started equipping their planes with detachable wing fuel tanks — and how that meant they could go further into Germany. I took the time to check the info against a military historian, Travis Beiersdorfer, and it seems to be very accurate for being so easy to read.

It is a very easy read to me, and I think most middle school students as well. All of it is written with the comic book fonts, but it is a short paragraph over or next to a picture. Rarely are there more than 3 sentences at a time, even if some of the language seems strange with the model numbers of planes. At times the names of planes can get overwhelming, but the key point is to not get wrapped up in that, but rather the broader strokes of technology and how things changed quickly for the needs of the war.

What this book does not go into are the ground troops or any other aspect of the war. It does not talk about the holocaust, the role of the Russians, much of North Africa, or any of the others on the Axis side of the fight. It’s not an all inclusive book on WWII, but it is a fun supplement for the kids that love planes or technology. It is probably even fun for the kids that just want to know a little more about how the Allies managed to tip the war in their favour with air superiority.

All in all, I think this is a good book to add as a supplement to the homeschool curriculum. It is factual, easy to read in an afternoon, and the kids will probably like its fun format.

Our guided reading questions walk the reader through the book while asking questions about the history of science and technology, the politics and culture surrounding the decisions, and points out causes and effects from both sides of the war. Grab the guided reading and more when you join our inner circle with the form below. 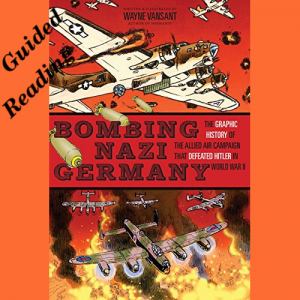 The comic book is an easy, fun read, and this guided reader will help you focus into the history of science and technology. Answer key included.

On Killing: The Psychological Cost of Learning to Kill in War and Society by Dave Grossman {book review}