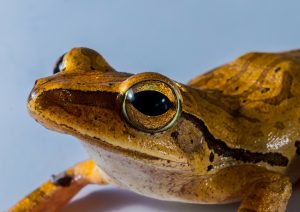 They say you have to kiss a lot of frogs to find your prince. Now, you might have to do it to avoid the flu.

At least this is what some scientists are hinting with the findings in a new study. According to their research, certain molecules found in frog mucus can potentially combat the flu. The Hydrophylax bahuvistara frog, which can be found in India, reportedly has the molecules. (“Killing flu viruses with help from a frog,” n.d.)

“Different frogs make different peptides, depending on where their habitat is. You and I make host defense peptides ourselves,” said flu specialist and study co-author Joshy Jacob. “It’s a natural innate immune mediator that all living organisms maintain. We just happened to find one that the frog makes that just happens to be effective against the H1 influenza type.”

To conduct their research, Jacob and his colleagues analyzed 32 frog defense peptides against a strain of influenza. A total of 4 of them had the ability to combat the flu.

“I was almost knocked off my chair,” said Jacob. “In the beginning, I thought that when you do drug discovery, you have to go through thousands of drug candidates, even a million, before you get 1 or 2 hits. And here we did 32 peptides, and we had 4 hits.”

However, not all of the news was good. When tested alongside red blood cells found in humans, three out of the four peptides were toxic. The researchers are now conducting further research into urumin – the one non-toxic peptide – to learn more about how it works.

Until a tried-and-true cure for the flu is found, the least we can all do is take steps to prevent it from being spread. Aside from avoiding close contact with those who are ill, the U.S. Centers for Disease Control and Prevention says that it’s important to take your own health into account when you feel sick. (“Preventing the Flu: Good Health Habits Can Help Stop Germs| Seasonal Influenza (Flu) | CDC,” n.d.)

If you think you may have the flu, stay home from school and work. Cover your mouth and nose to stop from spreading the flu to others. Washing your hands regularly can also protect you from the flu virus and prevent it from being spread on commonly shared objects.

Of course, it’s always a good idea to get vaccinated before each flu season begins. This can reduce your chances of contracting the latest strain of the virus.

Could Leafy Green Vegetables Be the Key to Preventing Dementia?