Carbon dioxide doesn’t have to be a bad thing – in moderate doses – but our planet is simply getting too much of it. Thanks to manmade activities, we now have to think about how carbon dioxide is going to affect everything from wildlife to the longevity of our planet in its entirety. Now, scientists are reporting that the levels of CO2 in the atmosphere are reaching new heights.

Gavin Foster, a professor of isotope geochemistry at the University of Southampton in England, recently led a study to determine the amount of atmospheric CO2 on Earth. (Foster, Royer, & Lunt, 2017) He discovered that CO2 levels are now as high as they were about three million years ago. Industrialization is to blame, and the planet has warmed about two degrees Fahrenheit over the past 150 years as a result.

To draw these conclusions, Foster and his team of researchers used geologic records to assess how levels of CO2 today compare to those of the past. They were also able to use the data to project possible CO2 atmospheric levels in the future. The researchers looked at 1,200 estimates of ancient atmospheric data. 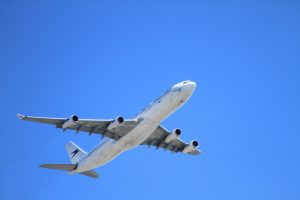 In the end, they discovered that CO2 has increased more than 30 percent since 1960. If it continues on this path, the researchers believe that people will simply have to learn to adapt to life with extreme heat.

“It’s a level of forcing that has not been experienced by the Earth, as far as we can tell,” Foster told Scientific American. “It puts the enormity of what we’re doing in context.” (Waldman, n.d.)

It might not seem like there are noticeable differences right now, but new research suggests that air travel may be negatively impacted by rising CO2 levels. More specifically, you can expect to feel more turbulence when you’re in the air.

Scientists have looked at turbulence strength levels to gauge how they will change in the future. They utilized supercomputer simulations of the atmosphere to calculate how these levels will change at about 39,000 feet when there is twice as much CO2 in the air. In the end, they predicted that the average amount of light turbulence will rise by 59 percent. Severe turbulence will rise by 149 percent. (Williams, 2017)

“For most passengers, light turbulence is nothing more than an annoying inconvenience that reduces their comfort levels, but for nervous fliers even light turbulence can be distressing,” said lead author Dr. Paul Williams. “However, even the most seasoned frequent fliers may be alarmed at the prospect of a 149% increase in severe turbulence, which frequently hospitalizes air travelers and flight attendants around the world.” (“Buckle up! Climate change to increase severe aircraft turbulence,” n.d.)