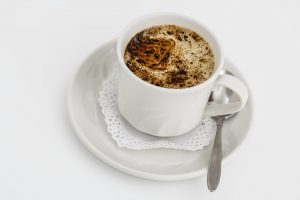 We’ve all heard the old adage that coffee causes cancer. Then it doesn’t. And then it does again. Now, a new study suggests that it’s not coffee we should be weary of – it’s hot beverages altogether.

According to research conducted by the International Agency for Research on Cancer, “very hot” beverages (more than 70 degrees Celsius) may play a role in the development of cancer in humans. Specifically, it could be a primary cause of oesophagus cancer. A group of 23 scientists revealed their conclusions on June 15, and detailed assessments of their findings will be published in The Lancet Oncology.

“These results suggest that drinking very hot beverages is one probable cause of oesophageal cancer and that it is the temperature, rather than the drinks themselves, that appears to be responsible,” said Christopher Wild, IARC Director.

To draw their conclusions, the scientists looked at evidence from epidemiological studies that had previously linked oesophageal cancer to hot beverages. The information had been gathered in countries including Iran, Turkey, and China, where tea or maté is traditionally consumed at hot temperatures.

“Smoking and alcohol drinking are major causes of oesophageal cancer, particularly in many high-income countries,” Wild continued. “However, the majority of oesophageal cancers occur in parts of Asia, South America, and East Africa, where regularly drinking very hot beverages is common and where the reasons for the high incidence of this cancer are not as well understood.”

While oesophageal cancer may not be the first type of cancer that comes to mind, it’s worth noting that it accounted for 5 percent (400,000) of deaths in 2012. It’s the eighth most common cause of cancer in the world.

Cancer and Coffee
If you enjoy your morning cup of coffee, keep drinking. The IARC also announced on June 15 that there was “inadequate evidence” to link coffee to cancer in humans. Originally, the IARC had deemed coffee “possibly carcinogenic” to humans in 1991. After combing through more than 1,000 studies involving humans and animals, they are now backtracking on their original stance.

Some oesophageal cancer studies have discovered that coffee drinking has no carcinogenic effects for cancers of the pancreas, female breast, and prostate. Furthermore, there is limited research that shows coffee may reduce the risk of cancer developing in the liver and uterine endometrium. Evidence linking coffee to 20 other types of cancer has been inconclusive.

And with that, drink on, caffeine lovers.

Don’t Feel Too Bad: Your Love of Coffee May Be Genetic