Not only should you be eating your vegetables, but as it turns out, you should specifically be eating your greens. This is according to new research from Rush University and Tufts University, which looked at how certain vegetables can play a role in dementia.

In a new study published in Neurology, the researchers looked at 1,000 people and how their intake of leafy greens played a role in their cognitive function (Morris et al., 2017). Their goal was to determine which types of vegetables – if any – could potentially play a role in preventing early cognitive decline. 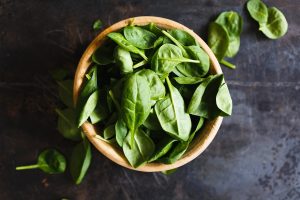 Over the course of the study, the participants were asked to complete food questionnaires, detailing how often they ate certain foods over the course of a year. Afterwards, the scientists estimated the levels of nutrients that were consumed by each participant based on their questionnaires. The individuals were also asked to undergo an annual testing of their memory and cognitive function.

In the end, the researchers found that those who ate the majority of their servings of leafy greens each day had slow cognitive decline, compared to those who ate less leafy greens. Statistically, the scientists claimed that this was equal to being approximately 11 years younger, cognitively speaking.

Based on their findings, the researchers believe that there are certain nutrients that may have contributed to better cognitive health in the study participants. Specifically, folate, lutein and nitrate likely slowed cognitive decline, according to the researchers. This may be because the nutrients often protect the brain against inflammation, stress, and other changes that can cause damage to the brain.

So how can individuals prevent cognitive decline with these nutrients?

The answer isn’t by taking supplements, according to the researchers. Dr. Martha Clare Morris, lead author of the study, claimed that the best way to ward off dementia is by getting these nutrients the good old-fashioned way – through a healthy diet, full of foods, such as leafy greens.

“It’s just so much easier and safer to get them from nature,” Devi told the news source.

And as for those crossword puzzles and books for keeping dementia at bay? There’s no harm in participating in mentally stimulating activities, either.

Could Marriage Help Ward Off Dementia? Some Scientists Think So

More Younger People are Being Diagnosed with Dementia