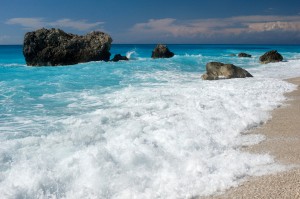 Before you lay out on the sand of your favoriteÂ beach, you may want to think twice about what may be lurking below you.

There’s been a lot of talk about sharks popping up at public beaches as of late, but what about fecal matter? A new study published in the journalÂ Environmental Science & TechnologyÂ has found that levels of fecal bacteria — the stuff that comes out of your body and ends up in the toilet — are 100 times higher in the sand as they are in the ocean. This means that even if you’re trying to avoid the “grossness” of the water, you’re still exposing yourself to plenty of bacteria.

This information comes from researchers at the University of Hawaii at Manoa, according to Newser. They conducted “laboratory microcosm experiments” using beach sand, seawater and sewage to draw up their results. The bottom line was that “common fecal indicator bacteria” was slower to decay in sand than in seawater.

A majority of beach-goers may be maintaining hygienic practices, but this doesn’t account for other warm-blooded mammals in the area. Â Wind, weather and water patterns areÂ responsible for spreading fecal bacteria near and far. However, humans aren’tÂ entirelyÂ exempt from responsibility. Researchers say that improperly discarded diapers and “accidents” that happen in bodies of water can get into waterways through storm runoff. Fecal bacteria can cause stomach aches and diarrhea in those who are exposed to it, creating one big vicious cycle.

But remember, you aren’t safe if you go to the pool (as opposed to the beach), either. The Centers for Disease Control and Prevention reported this year that irritations such as red eye and nasal irritation are not just from chlorine, according to Newser. Sweat, urine and other human waste that enters pool water can cause these problems when they bind to chlorine.

But enough of the disgusting stuff. How do you avoid these hazards?

Instead of completely avoiding the beach and pool, there are a few ways to cool off at these locations without compromising your health. Some of the easiest steps you can take are to avoid swallowing water (especially in the pool) and looking for visible signs of pollution, especially at lakes and ponds.

Of course, you’ll want to make sure you aren’tÂ contributingÂ to the problem this summer, as well. Make sure you shower prior to entering a pool, and check your kids’ diapers frequently. Wash your children thoroughly before visiting the pool or beach.

Seamons, Kate. “Love the Beach? What You Should Know About Fecal Contamination.” Newser. July 16, 2015.

Just How Much Pee is in That Pool Where You’re Swimming?