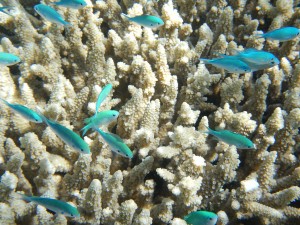 If you keep up with environmental issues, you might already know that the Great Barrier Reef has been a primary concern for scientists. Global warming and changing ocean temperatures have directly impacted the reef and its eco-system, but conservation efforts have been in full swing for years. That being said, how is the Great Barrier Reef these days?

Going, Going, Gone?
Not so fast. The “2014 Report Card” released by the Reef Water Quality Protection Plan has fond that the Great Barrier Reef is actually improving, according to the Tech Times. Pollution in the reef has declined over the past five years, and experts believe conservation efforts are on track to reach pollution reduction goals set for 2018.

Two Australian groups, the North Queensland Conservation Council and Mackay Conservation Group, have worked to challenge companies interested in dredging and dumping in the reef’s area.

Reading the Fine Print
Although the report card had some good news, there is still plenty of work to do in terms of protecting the Great Barrier Reef in the future. Increased nitrogen levels have been causing reef destruction, as well as the Crown of Thorns Starfish.

To tackle the nitrogen problem, experts are currently working on developing fertilizers to restore balance to the chemical in the soil. Nitrogen is also known to increase the amount of phytoplanktons in the water, which has been associated with the Crown of Thorns Starfish outbreak. Decreasing nitrogen levels would tackle both of these issues.

To further address the starfish, a CoTSBot has been invented by scientists at the Queensland University of technology. In short, the bot is designed to kill the starfish before it can cause damage to the reef.

As the cherry on top, scientists have also determined that vinegar — yes, vinegar! — can eliminate these creatures and prevent additional breakdown.

More than 1,500 species of fish live in the Great Barrier Reef. It stretches around the Queensland coast and includes about 2,900 reefs. It may seem like just another natural wonder, but reef industries (e.g., tourism and fishing) bring in more than $5.4 billion to the Australian economy. This is the equivalent of about 69,000 jobs, making it a rather significant asset for the country.

Meet RangerBot, Out to Save the Great Barrier Reef from Starfish