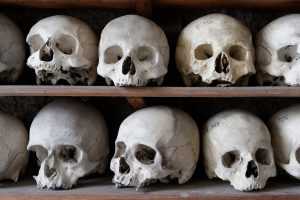 When did our predecessors, Homo sapiens, actually explore the grasslands of Saudi Arabia? According to a new find, they may have stumbled into this area a lot sooner than we originally thought.

But let’s back up for a moment.

It’s important to recognize that our species first appeared in Africa about 300,000 years ago (Dunham, 2018). Previously, scientists thought that Homo sapiens left Africa in a single migration about 60,000 years ago.

Researchers have discovered the fossil of a single finger bone dating back approximately 90,000 years in Saudi Arabia’s Nefud Desert. It was dated according to its length – the phalanx bone is 1.2 inches long. This would indicate that our species had traveled out of Africa sooner than we previously thought. The bone itself may also be the first ancient human fossil from the Arabian Peninsula.

“This supports a model not of a single rapid dispersal out of Africa 60,000 years ago, but a much more complicated scenario of migration. And this find, together with other finds in the last few years, suggests … Homo sapiens is moving out of Africa multiple times during many windows of opportunity during the last 100,000 years or so,” anthropologist Michael Petraglia of the Max Planck Institute for the Science of Human History in Germany told Reuters.

But what else can we learn from the finding?

For starters, our descendants did not only migrate along the coastline, as previously thought. The area where this fossil was found suggests that Homo sapiens also migrated in the interior of the land. In addition, stone tools were found along with the fossil. This indicates that the Homo sapiens might have stayed in the area for quite some time after arriving, but what happened to them afterward? Furthermore, how long did they reside in this region?

“We know that shortly after they lived, the rains failed and the area dried up,” University of Oxford archeologist Huw Groucutt tells Reuters. “Did this population die out? Did it survive further south in Arabia, where even today there are mountainous areas with quite high rainfall and coastal regions which receive monsoonal rains? Or did the drying environment mean that some of these people were ‘pushed’ further into Eurasia, as part of a worldwide colonization?”

Perhaps more fossils will need to be unearthed before we actually find out.