What encouraged some water species to evolve into land-based creatures? This is what some scientists attempted to determine by analyzing the bodies of terrestrial vertebrates that existed about 385 million years ago. (MacIver, Schmitz, Mugan, Murphey, & Mobley, 2017) They found that their eyes – rather than their limbs – may have played a large role in their evolution. Furthermore, eyes may have come before legs as some animals evolved.

To draw their conclusions, the researchers combined early tetrapod paleontology with computational visual ecology. With the help of computer visuals, they were able to gauge the magnitude of changes to the water creatures’ bodies over time. They immediately noticed a difference in the sizes of the species’ eyes – they grew larger as time went on. In addition, larger eyes correlated with larger pupils and more range in terms of visual capability. 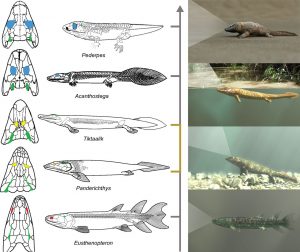 “Based on our results on trait evolution and computational visual ecology, we conclude that the observed increase in eye size is the result of adaptive evolution, where the derivative of the range and volume with respect to the pupil size is a proxy for the selective benefit of mutations that increase eye size,” the researchers wrote in their study.

In short, the eyes became larger over time and moved to a different region of the head for more visibility. Enhanced eyesight provided “very little additional performance” for the creatures underwater, which may have encouraged them to move onto land. However, it’s also worth recognizing that respiration with water required more effort from sea creatures.

“Possibly driven by low oxygen, animals surfaced near shore to breathe through the spiracles that had also dorsalized to just behind the eyes in the elpistostegalians,” the scientists wrote in their findings.

There were supposedly benefits to having better eyesight as well, even if it didn’t come in handy underwater. For example, these creatures could scope out new types of prey along the shoreline. The animals could have developed eyes and begun hunting for prey on land before actually moving beyond their water-based environments.

“Long-range vision gives you a free lunch,” study author Malcolm MacIver told The Atlantic. “You can just look around, instead of moving to inspect somewhere else.” (“Fish Changed in a Surprising Way Before Invading Land,” n.d.)

MacIver added that in a way, larger eyes allowed creatures to see further into time as well as space. There was less of a need to be reactive to what was in front of them once they could see further ahead. This bought them time and allowed them to become more proactive.

“Maybe having this expanded sensing volume allowed us to break the knee-jerk connection between sensing and moving, and decouple thoughts from action,” he hypothesizes.