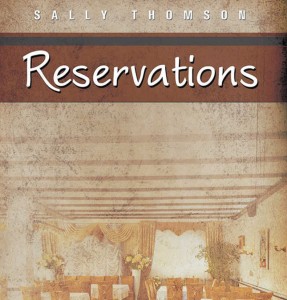 Captivating, thrilling and addictive. Those three words perfectly describe “Reservations,” the second book in a series by Sally Thomson.

“Reservations” starts out simple enough with Meagan Williams, the protagonist of the series, looking to move on from a relationship-gone-bad with Jack Stilwell, an FBI agent. It doesn’t take long for the two to give their relationship another shot after failing to deny their passion for one another. Romance is a consistent theme throughout the novel, which is enough to make it a worthwhile read for anyone seeking a fictional “happily ever after.”

However, it’s “Reservations’” thriller angle that makes the book difficult to put down. The mystery begins with Meagan’s coworker, Laura, stunned at the kidnapping of her daughters. When they are returned to her safe and sound, she decides to skip town in fear of the kidnappers, who may be after her deceased husband’s money. Meagan’s love, Jack, decides to pursue the case to find out where Laura’s husband had stashed excess funds, as well as who was after her children.

Leave it to Meagan to get entangled in Jack’s FBI work. To the delight of readers, the couple weaves their way through a trail of clues, which hint that an FBI informant may be responsible for the entire debacle. Without giving too much away, there is plenty of suspense along the way, and even a couple of kidnappings to spice up the plot.

By the end of the book, Jack and Meagan’s relationship appears to stand the test of time, but one question is left – what does the future hold? Can Jack and Meagan truly achieve their “happily ever after?”

“Reservations” has the perfect mix of mystery and romance, keeping readers guessing right until its final pages. Thomson excels in making her characters relatable, as well as loveable each step of the way. Whether you’re looking for a beach read or something to introduce to your book club, “Reservations” is your answer.

You can find more about Sally Thomson and her work at www.writinglifetx.com and www.txthomson.wordpress.com. Her books can be found on Amazon, and you can also follow her on Twitter!

An Interview with Sally Thomson, Author of ‘Reservations’

The War At Troy by Lindsay Clarke [book review]