You might think of a pond when tadpoles come to mind, but scientists have just discovered a new species that lives underground. In fact, the tadpoles feast on sand, and they’re just fine with their dark, damp environment. 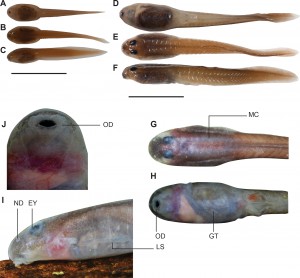 The species belong to the Indian dancing frog family, Micrixalidae. The tadpoles, Micrixalus herrei, come from sand beds in a stream in Western Ghats. They actively borrow underground and live a fossorial life until they reach late metamorphic stages.

“The tadpole gut contains mostly fine sediments and sand,” the authors wrote in their report, published in PLoS One. “We discuss the eel-like morphology and feeding habits of M. herrei in the context of convergence with other well-known fossorial tadpoles. This discovery builds the knowledge base for further comparative analyses and conservation of Micrixalus, an ancient and endemic lineage of Indian frogs.”

However, these wouldn’t be the first strange animals to be discovered by scientists. In fact, many of the world’s unusual creatures live below the surface — and deep within the ocean.

As time rolls on, one would have to assume that we only have more unusual, inspiring creatures left to discover in the world. And so, here’s to the waiting game!