In the article “10 Scientific Ideas that Scientists Wish You Would Stop Misusing,” Annalee Newitz spotlights a few common scientific misconceptions. To halt the trend, learners need accurate information, in a way they can process it, at a time they’re most open to it. The middle school years are a perfect time to address abstract ideas: the vastness of space, the dimensions of creatures great and small, and geologic time are key themes around which kids struggle. Middle-schoolers, or “tweens” are unashamed to be curious about the world, which makes it easy – and fun – to blow their minds teaching these concepts. Here are some ideas for flipping the abstract to concepts that are more concrete.

Make scale models
For centuries people have observed the night sky, but many fail to recognize the magnitude of what’s out there. Solar System projects (foam balls, paint, and coat hangers) grossly misrepresent our sun and planets, yet they come back year after year. Combat them with a more accurate model.

The earth took an enormous length of time to become the place on which we move, breathe, and drink lattes today. It took so long that people get mixed up about what happened when. This is addressed, too in Newitz’s article by paleoecologist Jacquelyn Gill (scroll to number 9). It makes sense. The human lifespan tops out at a tiny fraction of earth’s existence. Beyond that, our brains say “That was a long time ago” or “That’s a long time in the future.”

Make true-to-size models
The true-to-size model is a fun way to learn about objects or organisms that can be observed but are not accessible. For example, a species may be extinct, like the woolly mammoth or it might not be user-friendly, like the Portugese man o’ war. Use this type of activity for living and non-living things, as long as you have the space.

Use technology
The fossil record teaches us about earth’s history. It’s a description of earth’s development as told by fossils buried in layers of rock. It’s a little like reading earth’s diary: “Year 1.2 billion: I think bacteria is here to stay. Year 4.2 billion: Grew ferns and did not kill them!”  Scientists use the fossil record to divide earth’s history into chunks of time which are, from largest to smallest, eons, eras, epochs, periods, and ages. They are defined by major physical and biological changes that took place. We take for granted that life has always existed and that it will continue, but after the Paleozoic era almost all life on earth was lost. Study the fossil record to learn about the fragility of life on earth.

Here’s a way to use technology (and math) to further put to rest the foam ball model of the Solar System.

Offer impossible challenges
The “impossible challenge” is the single greatest activity to try with middle school kids.  It gets at the core of their ability to think about complex ideas without the skepticism that comes later. They want to believe.

There are many resources for excellent activities that teach abstract ideas in concrete ways. You can make some up yourself, and help grow a generation of science savvy minds that get the tough stuff and can explain it to others. Just follow a few guidelines. The activity:

Do you have any great ideas for teaching abstract scientific concepts? Please share them in comments.

Want to take better notes? The secret is taking the renowned Cornell method and modifying it for your personal needs. Learn how with this template and email lesson series. 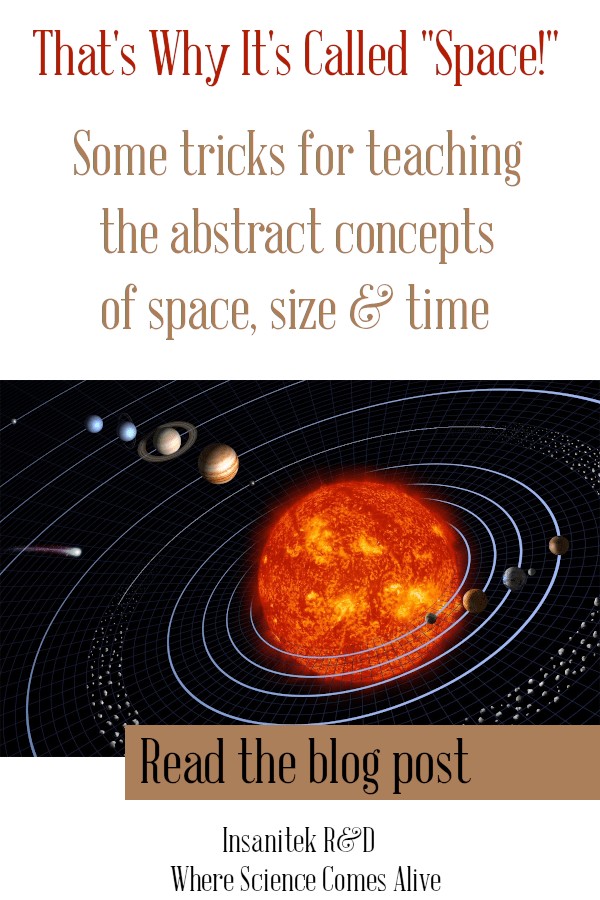 Experimenting with the medium: Lessons in teaching science

How to Plan Your Life and Lab To Suit You